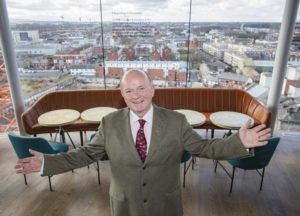 Standing by a spanking glass wall in a €20 million expansion to the Gravity Bar, the Guinness Storehouse Managing Director is drinking in 360-degree view that now extends from the Dublin Mountains to Howth Head.

Opening today, the figure-of-eight expansion doubles the size of Dublin’s best-known viewing platform, a 721m2 addition to a structure famously designed to look like the head of a pint at the heart of St James’ Gate.

“The Gravity Bar is like the jewel in the crown,” Carty says, explaining the decision to embark on a 16-month expansion that also sees the addition of new bars, a dedicated kitchen and murals of Arthur Guinness and the famous Guinness toucan by Dublin artist, Aches.

“Everybody comes in here to redeem their complimentary pint at the end of the tour… but it was just too tight. At any one time you could have 300 people [in the original bar], and they wanted to dwell and sip their pint in comfort and look over the view over Dublin,” he says. “So the capacity drove us.”

The new bar space will function like the old, capping off Storehouse tours, and 50 panes of floor-to-ceiling glass are inlaid with inscriptions picking out highlights from the city skyline.

The 46m-high bar is one of Dublin’s hero tourist attractions, with the Duke and Duchess of Cambridge stopping by this week, and previous celebrity visitors including Bill Clinton, Pink, Tom Cruise and Queen Elizabeth.

“In my prior life I ran five-star hotels in Bahrain, Singapore and Saudi Arabia, and I met very important dignitaries, but when I came back here and the Queen visited, the hairs on the back of my neck stood up,” Carty recalls.

Diageo was told in advance that the Queen and Prince Philip wouldn’t drink any Guinness, he reveal. “But they were really tickled pink by the pouring of the pint… and she just loved the view.”

The expansion is also something of a parting glass for Carty, who is set to retire on May 1 and will be replaced by Catherine Toolan.

When he came on board 20 years ago, the then-Guinness Hopstore was pulling in a respectable 400,000 visitor a year.

Since “decanting” the business into the Guinness Storehouse in 2000, at the time a €42 million redevelopment of a former fermentation plant, it has gone on to become Ireland’s most visited paid-for attraction.

The new Gravity Bar follows several developments for Diageo in Dublin, including a new behind-the-scenes brewery tour, the Open Gate Brewery, and Roe & Co – one of the city’s new wave of whiskey distillery experiences.

RKD, the architects behind the initial development, were brought on board again to transform the top of the seven-storey storytelling showcase, while O’Donnell O’Neill Design were the interior designers.

Views aside, murals by Irish street artist Aches, who recently painted Dolores O’Riordan next to King John’s Castle in Limerick, are the most eye-catching additions… working together with copper and turquoise furniture tones to play off the industrial feel of bare concrete and exposed ceilings.

Guinness loves its stats, and here’s another – with over 1.7 million visitors a year, Aches’ murals will be among the most viewed artworks in Ireland.

The new bar space also comes as another high-profile addition to The Liberties, a richly historical quarter that has recently seen the opening of new Hyatt Centric and Marriott Aloft hotels, as it has new distilleries like Pearse Lyons and Teeling’s – prompting talk of a resurgence in the city’s famous ‘Golden Triangle, as well as gentrification debates.

From the toucan’s-eye-view, Carty points out an 11-acre site that is marked for future development as a new ‘Guinness Quarter’ that will add more apartments, offices and retail.

“We’ve seen a huge uplift in the area” over the past 20 years, he remarks. “I’d like to see it as a new, cultural alternative to Temple Bar”.

“I believe we are now at the tallest point in Dublin,” Carty goes on to suggest. “Guinness is on a gradient up from the centre of Dublin, therefore we are reliably informed that we are at the highest point.”

“I even suggested we could do a zip wire from here, right into Roe & Co,” he laughs.

The Gravity Bar in Numbers

All glass supplied by CareyGlass.