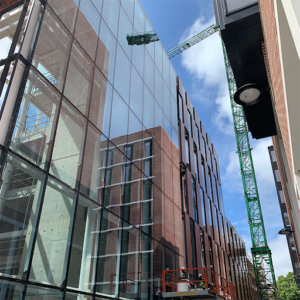 A new 7,000 sq ft European-style public plaza, 70,000 sq ft of “best-in-class” office space, a “cultural corridor” and the reinstatement of two old medieval laneways are all part of a massive €30m regeneration of Cork city’s medieval quarter, due for completion in November.

The restoration and regeneration project, with the iconic Counting House building of the former Beamish and Crawford brewery as its centrepiece, includes a stunning glazed atrium over a double-height new reception area – separate to the traditional Counting House entrance — and five floors of office space rising up from behind the Counting House, which, when completed, will accommodate circa 700 staff. The comprehensive use of glazing throughout the office floors will ensure stunning new views over Cork city, taking in St Fin Barre’s Cathedral and nearby 17th century Elizabeth Fort, right across the skyscape to Shandon Bells.

In addition, the project – 10 years in the offing — will incorporate riverside hospitality in the shape of a riverside bar and restaurant at ground level, and possibly a craft microbrewery as a nod to Beamish and Crawford, founded in 1792, at one time the largest brewery in Ireland.

Plans for a seven-screen cinema, viewing tower, and interpretative centre within the development was shelved. Paul Kenneally, development manager for BAM construction said there was no appetite for them.

The development is designed to align working, retail and cultural space across a building with a footprint of almost 90,000 sq ft. Cearbhall Behan of BIG property and Brian Edwards of CBRE said it will consist of c15,000 sq feet of high-quality retail, hospitality, and cultural space, with c70,000 sq of ‘Grade A’ offices accompanied by 69 basement car spaces. There is also ancillary basement capacity for parking bicycles, showering facilities, and storage lockers.

During a tour of the new Brewery Quarter site, Mr Kenneally told the Irish Examiner that the project had been “a lot more complicated” than any other he was involved because of the nature of the buildings.

“There were lots of hoops to jump through, so it’s nice to see it finally coming together.

“At the end of the day, there has to be a practical use to the building, there’s no point in doing it up if it’s unusable.” Mr Kenneally estimates that between 10% and 15% – c€3m – of the spend on the Counting House project went on conservation measures.

Replacement of spectacular Atrium-style roof lights in the Counting House cost “the price of a small house”, Mr Kenneally said.

Mr Kenneally has worked on the project with Gareth O’Callaghan of conservation specialists JCA architects since 2015. Mr O’Callaghan has been involved since a masterplan was undertaken for the entire site consisting of the controversial and yet-to-happen Event Centre, restoration of the brewery buildings, and Counting House and a €40m student housing development — which is completed with occupancy underway. BAM would not be drawn on the future of the beleaguered 6,000 seat €80m Event Centre which has been promised €50m in state funding. A spokesperson for Cork City Council said they “continue to work with the developers to agree on the final details needed to access the government funding agreement”.Mr O’Callaghan said the success of the Counting House and brewery buildings project “is that it brought along with it the historic fabric: walls, timber roof trusses, and vast iron columns and floors, now all incorporated in the new development”.Also incorporated are striking elements of the Beamish brewing process including the Mill Loft; a vessel known as a Mash tun where the ground malt was mixed with temperature-controlled water and “runoff “ wort pumped to the “Copper” and two huge Coppers or brew kettles where the wort was held at a “rolling boil “ and hops added.

The Counting House boardroom with beautiful oak panelling and one large date stone on the fireplace inscribed W.M.C.R. 1602 is also being restored. Mr Kenneally said the board room may eventually be rented out as a meeting room.

The mock-Tudor facade of the Counting House has been retained and its clock mechanism is currently being repaired by Stokes Clocks and Watches Ltd, Cork.

Vaulted brick arches have also been restored and cleaned on the ground floor where a north-south corridor, once known as Grain Lane, will act as a “cultural corridor” within the building and off of which other vaulted spaces can be used as exhibition spaces or put to other cultural use.One other historic laneway has already been restored- Lamley’s Lane — which runs east/west, on the same axis as Tuckey St, so that pedestrians coming from Grand Parade will eventually be able to continue over a new bridge across the river to Crosses Green. BAM said Lamley’s Lane bridge is at the design stage. A second bridge to link the proposed Event Centre with Proby’s Quay is in abeyance as this part of the site has yet to be developed. The restoration of a second medieval street, Cremer’s Lane, is due to take place in tandem with the Event Centre development. With much of the focus on public engagement with the Brewery Quarter, Mr Kenneally said the new 7,000 sq ft plaza will have power sockets in the paving and water supply to allow events such as farmer’s markets or concerts.

Mr Behan and Mr Edwards are expecting good uptake of the new office space. Mr Edwards said despite Covid-19, he believes the need for physical office space will continue into the future, and that “high quality, amenity-rich” offices such as those at the Brewery Quarter “will allow businesses to compete in the war for talent”.

“They want a space to exchange ideas, focus on career development, form relationships, collaborate, and innovate which is just not the same over voice/video conferencing,” he said.