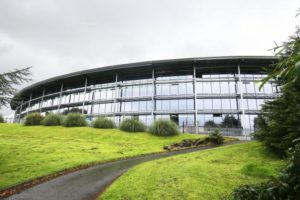 South West College has been recognised by the Queen for becoming an outstanding leader in environmental sustainability, by winning a Queen’s Anniversary Prize for Higher and Further Education 2020/2022.

The Queen’s Anniversary Prizes have been running for over 25 years. The UK-wide award recognises excellence, innovation and public benefit in work carried out by UK colleges and universities.

This is the first time the College has received a Queen’s Anniversary Prize, which recognises their pioneering work in environmental sustainability and providing training for the employment of young people in a low-carbon green economy.

The College has a strong track record of delivering sustainable education and training and their achievements were reflected when they were recently invited to attend the COP26 Conference to deliver a panel discussion which explored the role buildings will play in fighting climate change. The Conference provided an opportunity to showcase the College’s newest £30 million world-class Erne Campus as an international exemplar of what can be achieved in sustainable design and construction.

Whilst there, the College signed a Memorandum of Understanding with United Nations Economic Commission for Europe (UNECE) to become one of the first Centres of Excellence for high performance buildings joining a prestigious network of the most sustainable buildings from across the globe.

Over the past decade over 5,000 students have participated in sustainability courses at the local Further Education College, creating the talent pipeline necessary to drive forward the ‘green economy’.

The Queen’s Anniversary Awards are the highest national honour available to universities and FE colleges across the UK and this year includes the highest number of FE recipients since the scheme began in 1993.

Colin Lewis, Interim Principal and Chief Executive of South West College said: “This award is a wonderful tribute to our staff and the exceptional and tireless work taking place to establish South West College as a leader in the delivery of renewable energy and sustainable education, training and employment.

“Renewable energy and sustainability have been at the forefront of College delivery for several years, both in terms of the curriculum we offer to students and our own construction and fit out practices. The Award is particularly significant as our newest campus in Enniskillen was last year confirmed as the first educational and currently largest Passive House Premium rated building in the world.

“We deliver a unique curriculum, education and a training programme specialising in renewable energy and sustainability in a live working environment and we hope that in this way we can continue to provide specialist training for the employment of young people in a low-carbon green economy across the UK and beyond.”

The Queen grants the awards every two years, but entries are assessed by the Royal Anniversary Trust charity and recommendations for winners are made on the Prime Minister’s advice.

Royal Anniversary Trust Chair Damon Buffini said the colleges and universities being honoured “are testament to the rich and impactful work being done at our educational institutions day in, day out”

CareyGlass are proud to have supplied the glazing to this world-class project.

Glazing Details: Delivering an average project façade u-value of 0.8w/m2K, ranks it alongside prestigious buildings such as the Apple Campus 2 in terms of sustainable innovation and design. The new building faces south in a curved form, maximising daylight and solar gains, facing towards the town and the Erne River. It arcs around a landscaped public space to the north. A 15 metre deep atrium is central to the design, providing functionality whilst acting as a winter garden and encouraging daylight and ventilation. Classrooms are designed with a buffer zone and north-facing windows to reduce glare and overheating risk.